Algae are an infinite and important source of active molecules with original chemical structures and natural bioactive substances. Therefore, they are significant in the accumulation and neutralization of various pollutants. Within the framework of two species of brown algae valorization, Cystoseira compressa and Padina pavonica were collected at the level of the Algerian west coast (Stidia beach), a study was carried out initially to evaluate the antibacterial activity concerning two bacterial strains (Staphylococcus aureus and Escherichia coli). Secondly, a test of neutralization of two heavy metals was carried out to determine the absorbing effect of these two algae. This test will help to follow the degree of metallic contamination by the (Cadmium and Lead) at the level of the coastal zone of the Algerian west. The results of the antibacterial activity showed a significant cooperative effect of the mixture of the two algae, where we were able to increase the inhibition diameter to 16 mm and determine the MIC for the E. coli strain. For the test of neutralization, a dosage of cadmium and lead of the seawater was carried out; the results obtained showed a rate of elimination of 15 % Cd for Cystoseira compressa and 8 % Pb for the mixture of the two algae. In the light of the obtained results, we notice the absence of the antagonistic effect between the two algae where the interest of using these algal supports in the treatment of polluted waters.

The marine environment and the organisms that inhabit it constitute an infinite source of active molecules with original chemical structures (Smit, 2004; Glombitza et al., 1979). Among these marine organisms, algae are an important source of natural bioactive substances. Currently, scientists are promoting the development of a new generation of plant-based antimicrobial substances to replace synthetic ones. Likewise, several industrial sectors are again turning to incorporate these molecules with interesting biological characteristics in their formulations (Taviano et al., 2013). Algae offer a range of biological activities, including anti- inflammatory, antimicrobial, anticancer, antiviral, anti-protozoal, anticoagulant, antifungal, antioxidant (Taboada et al., 2012; Cox et al., 2010; Hellio et al., 2004). Studies have allowed the isolation and identification of many new molecules of great structural originality, many of which have biological activity. Furthermore, seaweed extracts have been extensively studied by several researchers pharmacologically. Thus, the presence of different activities has been demonstrated for a long time in several seaweed species (Kherraf et al., 2017; Metidji et al., 2015; Saidani et al., 2012; Park et al. 2005; Faulkner, 2001). Recently, the algae of the Algerian coast have received much attention for their natural antioxidant potential, and most of their compounds have shown antibacterial activities (Mellouk et al., 2017; Oucif et al., 2017; Aissaoui et al., 2017) and anti-pollutants towards some heavy metals (Gherib et al., 2018; Benfares et al., 2015). Nevertheless, their specific richness constitutes a natural reservoir of plant species: this biomass remains untapped. Therefore, it is necessary to think of diversifying research to ensure the economic development of Algerian coastal areas. Heavy metals are pollutants whose harmfulness is related to their persistence and speciation (Jost & Jost- Tse, 2018; Gherib et al., 2018). Their concentrations in the environment are of the order of a few nanograms per liter of water, making sampling and measurement techniques complex, so their removal prompted us to move towards an effective biological process. We turned to a mixture of two brown algae (Cystoseira compressa and Padina pavonica) to evaluate their bacterial and depolluting potential. In this context, the present work aims at enhancing the cumulative antibacterial effect of the brown alga Padina pavonica and Cystoseira compressa in order to use them in the retention of heavy metals.

Presentation of the harvesting site

The collection of algae took place in the beach of Stidia (Mostaganem province) during October 2020 (35°49'52.774"N, 0°01'01.722"E). This site is subject to anthropic and seaside influences directly. Several factors caused the choice of the study area: geographical location, urbanization of the coastline, hydrodynamics, and access without the boat (Figure 1). Figure 1: The geographical location of the study site.

For this study, two algae species were collected (Cystoseira compressa and Padina pavonica); they belong to macroalgae: Phaeophyceae. Although our sampling is simply random, it was done at a depth of 20 cm. After harvesting, the algae are washed several times with distilled water to remove any foreign matter and facilitate the bacterial activity evaluation. Then, the algae were separated and dried in an oven (60°C) for 24 hours until the dry matter was stabilized.

The prepared seaweed powders were extracted in a mixture of 5 g of seaweed powder with 75ml of acetone for each species. The extraction is done by maceration under agitation for 24 hrs in the dark. After centrifugation at 3000 rpm for 5min, the supernatant was distilled at room temperature; a reconstitution of the extracts was made with DMSO. The algal extracts obtained are stored at 4°C until use for biological tests.

The antibacterial activity of the extracts were done in an aseptic zone by the method of diffusion in solid media Muller Hinton agar; the suspension was prepared according to the standard MCFARLAND for the plating of solid media. Sterile Wattman discs of 6 mm diameter loaded with algal extract are placed in the middle of the petri dish, and a disc loaded with 15 ul of DMSO was used as a control. The prepared dishes are incubated at 37°C for 24 hours; the reading of the results is done by measuring the diameter in millimeters of the inhibition zone. Table 1 illustrates all prepared extracts.

Table 1. Extracts of the two algae.

The prepared tubes passed under magnetic stirring at room temperature for 35 days, followed by filtration. The concentration of metal ions cadmium and lead was determined by atomic absorption spectrophotometer (Perkin Elmer Analyst 300). The percentage of removal is given by the following formula:

C0 and Ce: is the initial and final concentration of metal. (Belattmania et al., 2018).

Evaluation of the antimicrobial activity of different seaweed extracts

Table 3. Evaluation of the antimicrobial activity in different algae extracts.

According to the results obtained, we have noticed that the extract (T1) presents a significant antibacterial activity towards the bacterial strain E. coli with a zone of inhibition of 14 mm, compared with that obtained for the strain S. aureus registers a diameter of 10 mm regarding the extract (T2), we found that it does not show significant activity. The extract (T1) did not register a value of the minimum inhibitory concentration towards the two tested strains.

Antibacterial activity by a synergistic effect of T1 with T2

The activity of the mixture of the two algal extracts (T3) shows a positive result since the inhibition diameter of both strains increased significantly, by 16 mm towards E. coli. However, we observed a decrease of the MIC towards the E. coli strain with a value of 25(ul). The evaluation of the MIC was impossible for the extract (T1). According to the results, we affirm that the mixture of the two seaweed extracts (T3) presents a significant antimicrobial activity towards the S. aureus strain by recording an initiation diameter of about 12mm; this result confirms the research work of (Sumaia & Munay, 2020). Based on the research work of (El Soubaky et al., 2014), we confirmed our results obtained on the inhibitory effect of Padina pavonica algal extract, which shows good antimicrobial activity against both E. coli and S. aureus strains. In the light of these results, we can reveal that the cooperative effect of Padina pavonica extract (T2) with Cystoseira compressa extract (T1) is well present on the E. coli strain.

For the pollution control test, the raw and mixed algal biomass was prepared to determine the concentration of two heavy metals (Cd and Pb). The determination was performed by the atomic absorption spectrophotometry (AAS) technique (Perkin Elmer Analyst 300). The results obtained are shown in Table 4.

Table 4. The concentration of heavy metals in seawater samples treated with brown algae.

From Figure 2, we found that the sample treated with Cystoseira compressa extract (T1) recorded a value of 0.084 ppm for Cd, a significant decrease of 15% compared to the control test, which recorded a value of 0.099 ppm. This decrease is due to the absorbent power of Cystoseira compressa towards the metal. On the other hand, for the rate of Pb, we noted an increase of the order of 1.418 ppm, which is probably due to the high concentration of pollutants resulting from the anthropic activity of our study site. For the biomass prepared with alga Padina pavonica (T2), the results allowed us to note that there is an increase in the concentration of Cd compared to the control test, recording a value of 0.111 ppm, unlike Pb, we noticed a slight regression of the order of 4% which corresponds to a concentration of 1.106 ppm. For the biomass prepared from the mixture (T3), it records a concentration of Cd of the order of 0.110 ppm, this significant increase compared to the control test allows us to advance that the mixture does not have an absorbing effect towards this metal. For Pb, we noted that the extract prepared from the mixture (T3) registers a significant regression corresponding to a concentration of 1.061 ppm, that is to say, a percentage of decrease 8%, compared to the control test, which lets us note that there is an absorbing effect of Pb by the mixture (T3). Comparing the obtained results, we notice a close dependence between the algal biomass of Cystoseira compressa (T1) and Cd metal, the mixture of both algae (T3) and Pb. These results provide insights into which these brown algal species should be used in the biomonitoring of marine ecosystems. 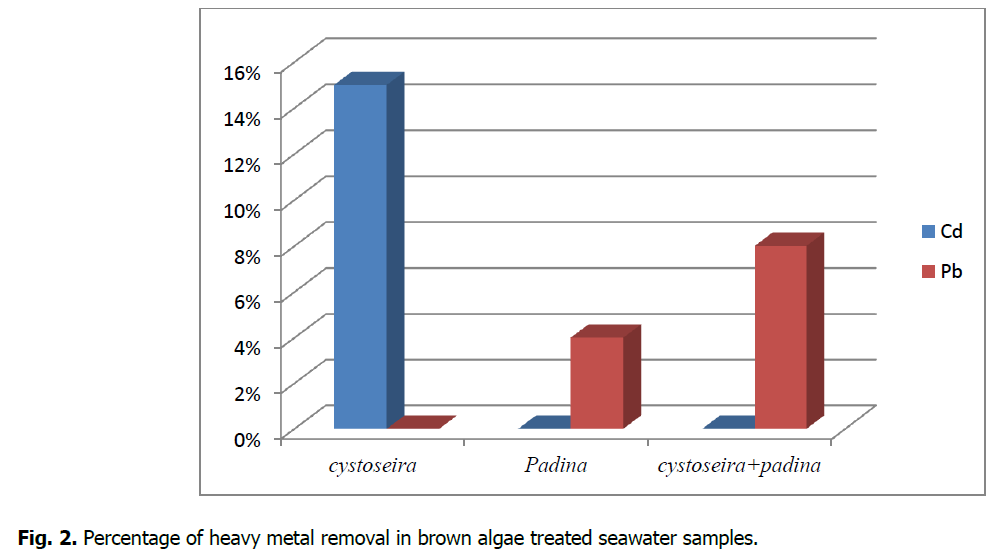 The present study showed that the extracts of Cystoseira compressa and Pavina pavonica have valuable products that can inhibit the growth of pathogenic bacteria (E. coli and S. aureus). Our results revealed a significant synergistic effect where we were able to increase the inhibition diameter against both strains and reduced the MIC; this result confirms the absence of the antagonistic effect to increase the activity of the antibacterial agent. The study of neutralization revealed that these algal supports are bio- accumulators of heavy metals (cadmium and lead). Our results show significant percentages of Cd decrease by Cystoseira compressa as well as Pb by Padina pavonica and the mixture of both algae. Furthermore, this study on Cystoseira compressa and Padina pavonica collected on the Algerian coast (Stidia beach) gave a result that can be valued in other research works since these biological supports are natural sources that can be exploited in the environmental (neutralization) and pharmaceutical fields (antibiotics).

Kherraf, A., Tehami, W., Boufeldja, W., Yahla I., Dra, G., Mansour, I., Benali, M. (2017). Determination of the nutritional and functional metabolites of Nannochloropsis gaditana produced in Algeria and evaluation of its antioxidant activity. South Asian Journal of Experimental Biology, 7(1):13-20